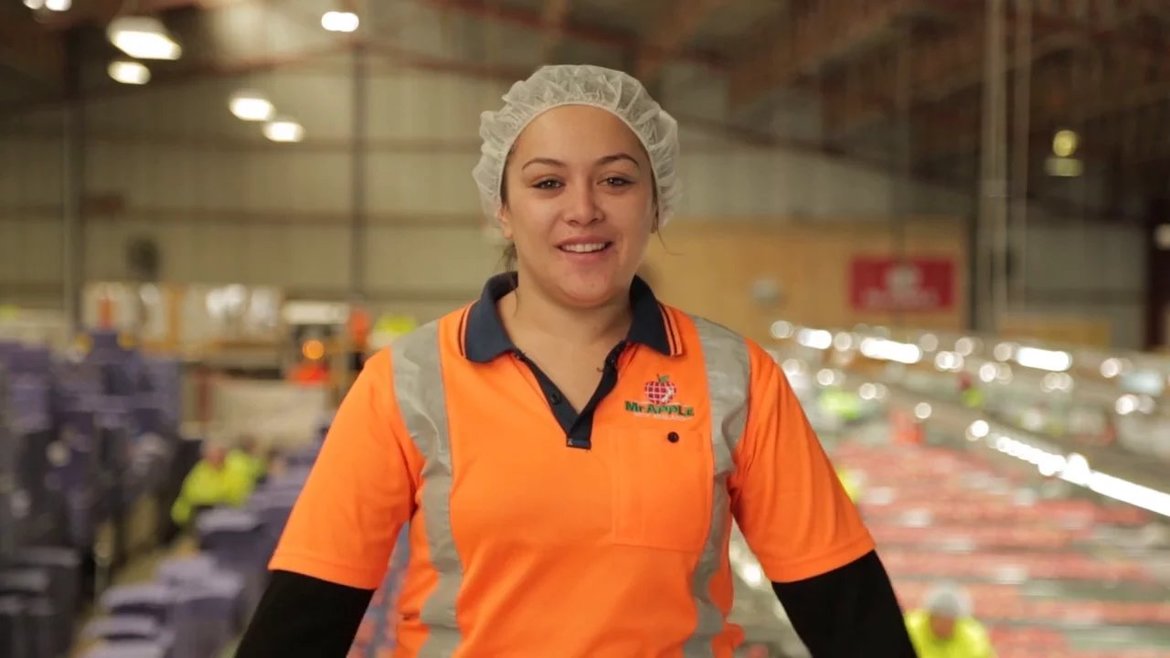 An apprenticeship in the apple industry is helping Cherokee Hancox-Kirikiri get ahead. The young packing lane supervisor has moved up the ranks since she started as a part time packer, and her goals are taking her to the top.

She supervises about 30 staff on the packing lanes, ensuring the high quality fruit is packed correctly and efficiently, as well as managing the technology and machinery to keep things running smoothly.

But her ambitions don’t end there. Her next goal is to move up the ranks to shift manager.

To help her get ahead she’s completing her apprenticeship, and by next year will have her Level 4 Advanced Certificate in Horticulture.

“I spend half the year working in the packhouse and the rest of the time I’m on the orchard doing things like driving the tractor, spraying and pruning.

“The apprenticeship is pretty hands on which I like, and my managers have me doing different things every day so I am learning about all the areas of the industry from the orchard to the packhouse.”

Cherokee says once she’s completed her apprenticeship she’ll be able to work anywhere in the world.

“Once you’ve got your apprenticeship, there are more opportunities for you and you can jump into any packhouse in the world. You can go to Australia and pack mangoes, peaches, whatever. Once you’ve got that under your belt you can pretty much go anywhere.”

It also gives her the opportunity to work in different roles within the industry such as orchard manager or lab work.

Cherokee was 15 when she began working the late shift on a Friday night to get some pocket money and once she finished school she started working as a packer full time. However she soon aspired to take on more responsibility.

“I watched the supervisors and they were always busy, always doing something different and I thought ‘I want to do that’. I wanted more responsibility so I put my hand up and they gave me a chance and it really paid off.”

She worked a range of different roles around the packhouse before taking up the position she still holds, as packing lane supervisor.

“I like that it’s a really hands on job, it suits me. I’d rather do a hands on job than sit with my head in a book all day.”

During the season it’s hard work, often six days a week and 12-hour days, but Cherokee says the challenge is what makes it fun.

“Lots of people think it’s just packing apples but there’s a lot more to it. They have to be a certain size or certain colour, and they’ve got to meet quality requirements. I like having that challenge, it makes me want to do well, and it’s fun.”

She’s also learning to be a technician for the equipment and machinery in the packhouse so she can spot problems and fix them before they happen.

Mr Apple employs workers from Samoa, Solomon Islands and Tuvalu who work alongside Kiwi workers and backpackers, which poses a challenge for Cherokee who has to adapt to different cultures and languages.

“When I started as a supervisor it was quite intimidating, when I realised you couldn’t treat everyone exactly the same and get the same results from them.”

Being a young female also has its challenges, she says.

“Some of the older workers aren’t used to being told what to do by a young woman, and the younger ones can think they know what to do.”

She’s found the best way to manage is to get to know each person personally.

“The biggest thing was learning people’s names. Once you know their name and get to know them better you get respect and a better relationship with them.

“It’s all about your attitude. You’ve got to have a bit of confidence in yourself when you do the job because if other people see you’re not confident they start knowing you can be a pushover.”

Cherokee says she’s excited about her future in the industry.